Sorting out the Spring Garden in San Antonio

Spring in the Garden 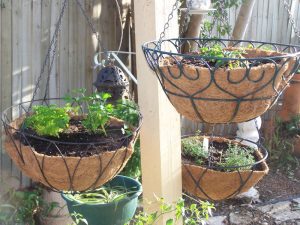 Yes, we know very well that the official date for 'last frost o' the season' for San Antonio is March 15th – but the trees are tentatively beginning to put on new leaves, the new grass – or what passes for the grass in weedy fields and verges – is already thick and green, and so it is time to get back to the garden. The suppliers have gotten the early spring vegetables starts in already. So – we went out this last weekend to get started in a bigger way, especially since the early lettuce and greens that we put in pots a couple of weeks ago did very nicely. 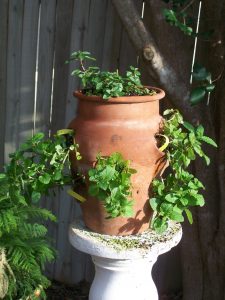 The topsy-turvy planters had been emptied of last year's plants and the soil; we were so encouraged by the success of growing peppers and tomatoes last year that visions of beans, eggplant, zucchini and more tomatoes are dancing in our heads. It's time to start with the seasonal herbs again, things like basil, which never, ever last through the winter. Sorry – the first time the temperature drops below 40 degrees, the basil is gonna croak, and hauling the pot indoors will not help. After (gulp) thirty years of growing herbs on balcony, back garden, or patio, this is akin to accepting that the sun will come up in the morning and go down in the evening. 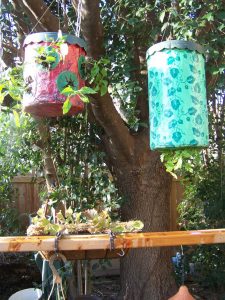 Last fall, we found three earth box planters put out on the curb for bulk trash pick-up. I guess someone was going to move, or had just said the heck with growing mass quantities on the back porch, so we took them to our San Antonio home, and I looked up the website to find the manual. Hmm ... as Mr. Spock so often observed, 'Fascinating.' So – first on the list: several massive bags of potting soil, granular fertilizer, plastic to cover the tops with; hey, just the regular garden stuff and kitchen string will do. 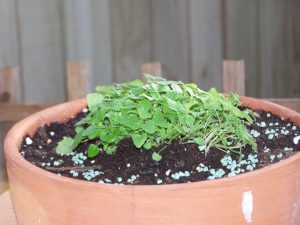 We did over-spend on plants. Lettuce and greens; eight tomato plants, some cardoons and an artichoke; I so love artichokes, very likely I will go back and buy some more. Herbs; oregano, parsley – two kinds of each, and my daughter discovered all the different kinds of mint that there are at the Antique Rose Emporium. Mint is an invasive plants – as persistent and unkillable as kudzu or crab-grass once established, although the various disasters that my back yard has been heir to for the last five years has eradicated the mint that I once had growing wild in the ground. Among the army of empty pots is a strawberry urn, with the eight little side pockets ... which we have tried to plant twice times: first time with strawberries, of course. 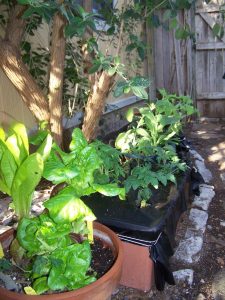 Second time my daughter had a go with mixed herbs – with disastrous results. Oh, the plants did very well at first, but the trouble is that the water runs into the top of the pot and carries out the soil through all the little pockets. You have to water the darned thing pretty often, because of all the plants in it – but this time, my daughter had an 'ah-hah!' moment, considering the sheer, persistent toughness and durability of mint, and I suggested cutting circles of coir matting, with a slit in it and a small opening for the plant stem. So, my daughter spent her money on different flavors of mint plants – and some coir inserts – and we'll see if the third time is the charm.

But ... in all the excitement, I forgot to get basil. Darn.