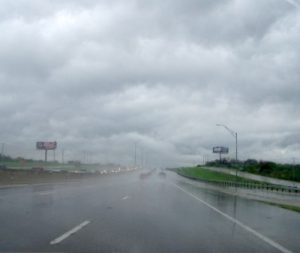 Storms blew in again into San Antonio tonight, bringing welcome rain, something which - with luck - happens least once a month during a normal spring and summer. Thunderstorms in South Texas are as outsized as everything else is supposed to be in the west. Sometimes they appear as great creamy mounds of cloud, piling up and up and up in the clear blue sky, the bottom layer as flat and grey as a an iron, pressing down on the land.

A thunderstorm sweeping in from the mountains, or up from the Gulf will cover the entire sky; there is an odd, sepia or greenish cast to the air, until the last of the sunlight winks out. The clouds darken to leaden grey, and press closer, as if twilight is falling in the middle of the day. Lights that are activated by a sensor - streetlights and advertising signs and such - wink on. Sometimes the storm is announced by gusts of wind, but more usually by a distant grumble of thunder. 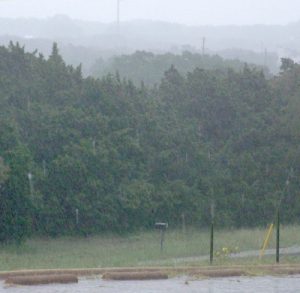 Storms that come in at night introduce themselves with lightening; one spectacular storm a couple of summers ago lit up the sky constantly for half an hour; nonstop flickering light, etching the trees and tall landmarks in harsh, blue white light; impossible to count the seconds between the flash and the noise, while gusts of wind lash the tree branches.

The spring rain announces itself as a faint rustle in the grass and in the tree leaves, pattering in random wet splotches on the stone path. The first few fat drops resound like small pebbles on the fiberglass porch roof, and then the full force sweeps in, and the light pattering becomes a full-throated roar. The porch roof is fringed with silvery streamlets of water, everything beyond my garden are dim shapes in the veil of rain. The rainwater is cold, or maybe it only seems so, but it feels like the storm has brought a breath of coolness with it.

The rain sheets off my neighbor's roof, overflowing the gutter and splashing into the flowerbed that I have mulched with gravel. My own downspouts are spilling water into my rain catchment and rain harvesting barrels then overflow into the area between our houses, the garden path is awash with it. The street in front of my San Antonio house runs nearly ankle deep in water after a downpour like this; somehow the this city has never quite got the hang of constructing roads with adequate coving; roads and drains mean pretty much the same thing. To our enormous civic embarrassment it is entirely possible to be swept away and drown within city limits, as the result of driving down certain streets in a heavy rain. 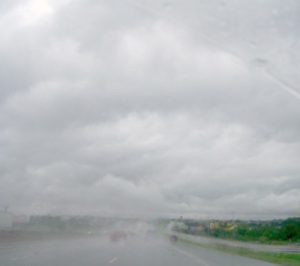 Ten, fifteen, twenty minutes, the downpour is relentless, but then it seems like it is not so dark, the twilight is lifting, and the roar on the patio roof dies away. A few birds chirp uncertainly from where they have taken shelter. A crack of blue sky widens between two clouds, a fan of sunbeams spreads open like the halo of a saint in an El Greco painting, and the storm is gone as swiftly as it arrived. And with luck, there'll be another one in a couple of weeks, so I'll not need to water my garden with the hose, and the little white wildflowers that people call rain-lilies will miraculously sprout in a day or so, nickel-sized white hexagons on a green stem, swaying among the uncut grass in the fields and roadsides.