The Flowers in the Fields 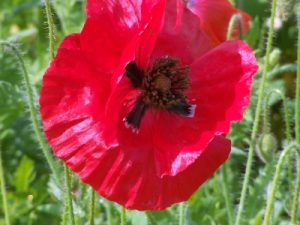 Two weekends ago, I had reason to go traveling to the East Coast – to the area of Washington, DC as a matter of fact. Since my airline flight to that place arrived and departed at the Baltimore Airport (oh, don’t ask, long story!), I had a wonderful opportunity to observe spring in full flower, along the various parkways and highways between Baltimore and Washington. Not just that, but it was fairly clear on approach – gosh, it was green back East, and the cherry trees in bloom stood out so clearly. 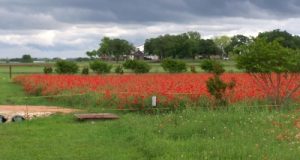 The flowering pear, the cherry and the dogwood trees were in full bloom, tangles of lilac made pale violet splashes among the otherwise plain green trees in the green belts along the highway. It was a very pleasing vista – only the autumn foliage equals it for sheer spectacle or so I was told . . . but there was one immediate lack. Although the grass verges and the median strips were verdant and starred with flowers . . . those flowers were all dandelions. Now, dandelions have their place and even uses – but still . . . 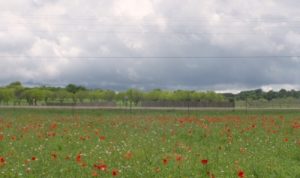 Compared to the spectacular verges and medians of Texas highways in springtime, this presented a very humdrum appearance. Oh, for fields of wildflowers . . . so last weekend, we drove up to the Hill Country to get our fill, of meadows carpeted with primroses, bluebonnets and poppies. 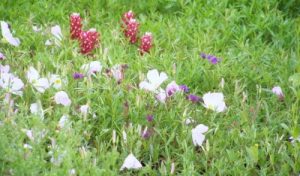 Eventually, we wound up at Wildseed Farms, out along the 290 (Texas’s very own Wine Road!) east of Fredericksburg, which is billed as the world’s largest working wildflower farm. Well, everything IS bigger in Texas, isn’t it? If there is another specialty nursery establishment in these United States which features live music on weekend afternoons, I’d love to hear about it. 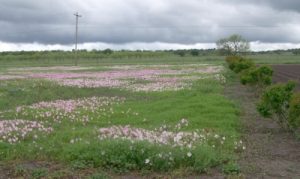 Besides the live band, the nursery and garden accoutrements, fashions and accessories, the exhibit plantings, trees and water-features, there was a country store (which dispensed, among other delights – peach ice cream. There were comfortable tables and chairs spread out in the shade – and meadows of wildflowers, all around. Brilliant red corn poppies predominated mostly, at this time of year, although the field in front of the parking lot was carpeted with pale pink primroses. 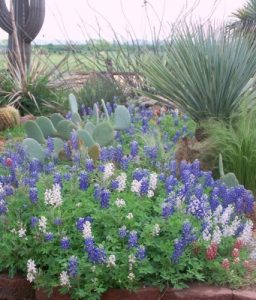 They have mown walkways through the flower meadows, so it is possible to wander fairly freely with a camera and play ‘spot the flower oddity’ up close and personal. Tiny, shy white and purple ‘Five Spot’ flowers, completely white bluebonnets, as well as the totally red variety are to be found among the flower-meadows and exhibit plantings. Should anyone want to plant a living Texas flag out of the variously colored bluebonnets, Wildseed Farms would be the source for the plants.

We’ll be making a return trip to the Farm – just to see the summer crop of flowers, and listen to the band. And the peach ice cream was positively delicious.