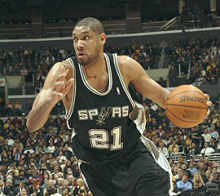 All season long the Spurs have seemingly been a team with two faces.  There are the defending champs, who play tough, smart basketball, and then there are the other guys, who struggle to put the ball in the basket and play uninspired.  Normally, these streaks last for a game or two, but in Game 1 against the Lakers, the defending champs showed up in the first half, but the other guys came out after halftime.

The good Spurs lead by as many as 20 points, but the other guys fumbled around in the final quarter, allowing themselves to miss almost every shot, and not being able to stop the league MVP, Kobe Bryant, or anyone else.

The Spurs had the series in the palm of their ring-laden hands.  Up by 20 in LA, they were ready to send a message that they were taking home court advantage back, and were ready to defend their championship against all comers.  Unfortunately for San Antonio Spurs fans, the effort was not sustained in the second half, and Bryant had his way with San Antonio in the half, scoring 25 points.  The Spurs actually seemed to play worse as the game went on, topping the game off with a 3-21 fourth quarter.

As soon as the third period opened, San Antonio picked up right where they left off, going on a 14-2 run to push their lead to 20.  Of course, that’s when their party ended and LA’s began.  Kobe Bryant helped start a 14-0 run the other way, scoring 7 points, and adding a pair of assists to help his team close the gap.  After that, the Spurs were, for the most part, done.  Although they had opportunities to tie or take the lead late in the game, it was Bryant’s game as the game wore on.

For San Antonio, Tim Duncan scored 30 points, had 18 rebounds, and a pair of assists.  Tony Parker also had a good stat line, scoring 18 points and grabbing 10 rebounds.  Ginobili had an off-night, only managing 10 points on 3-13 shooting.   Duncan scored his final two points with 41 seconds left to tie the game at 85.  With LA up by a basket, Ginobili had a chance to win in the closing seconds, but missed on his three-point try.

San Antonio will try their luck again Friday in LA, before the action shifts back to San Antonio Texas for Game 3.