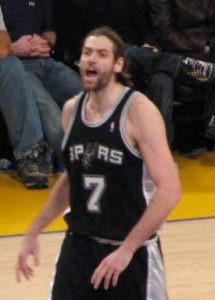 The Spurs kicked off their season Wednesday night, but someone may have forgotten to tell the team that the games count from here on out. Although, on the other hand, the team didn't have a particularly stellar pre-season either, so they might as well get started with the real games. The idea behind the pre-season is to practice working together and knock off the rust from the summer. The idea is to get better through practice. Unfortunately for the Spurs, the team's pre-season record was 3-4, so hopefully they weren't practicing bad habits. After dropping the first game of the season to Phoenix, 103-98, one has to ask.

The Suns have a new coach this year, as ex-Bucks coach, Terry Porter, was tapped as the head man after Mike D'Antoni left to go to the Knicks. As all Spurs fans know, Phoenix is a heated rival, and many times have the teams met in the playoffs, with the Spurs usually getting the best of the match ups. While Phoenix may have some new wrinkles this year, especially on the defensive side of the ball, San Antonio's tried and true game of tough-as-nails defense and a powerful inside scoring should be much the same as it has been the last few years. Of course, with Manu Ginobili out until mid-December, someone else will have to step up and fill in the missing defense and scoring in the meantime.

In the season opener, the Spurs defense was not up to its usual standards, as the team allowed five Suns' players to score in double digits, allowed the team to shoot almost 50% from the field, and 40% from behind the three point line. As expected, the Spurs Big 2 did most of the damage, with Tony Parker and Tim Duncan each scoring 32. Roger Mason did his best to come off the bench with a Ginobili impersonation, and logged 12 points and 4 rebounds, but it wasn't enough in the end. Kurt Thomas, Udoka, and Jaques Vaughn only managed 2 points each. Bruce Bowen didn't score. As a team, the Spurs shot fairly well from the field (50%) and adequately (33%) from behind the arc, but the Spurs also got a bit of unfortunate news when Fabricio Oberto felt a flutter in his heart and was diagnosed with an irregular heartbeat. He missed the season opener and is being monitored daily. If things go as planned, Oberto is expected to return next week.

We all know that the NBA season is long (from October to June, seriously?) and getting off to a great start is not all that important. Finishing it is, and there are months and months to go before things get decided. The key for the Spurs is to keep afloat and in the division mix until Ginobili gets healthy.