Spurs Lead Division but Manu Out with Broken Hand 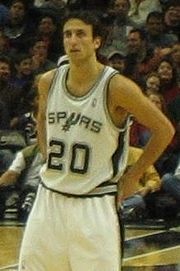 The good news for Spurs’ fans is that, due in part to an underperforming division as a whole, the Spurs are in first place in the Southwest division. The bad news is that Manu Ginobili broke his hand in the recent loss to Minnesota, and is expected to miss 4-6 weeks. In this year’s condensed season, that comes as very bad news to a team made up of aging veterans and many untested younger players.

There is no way to sugarcoat the loss of the Spurs most dynamic playmaker and emotional leader. Ginobili is the best defender on the team, and the player that makes the Spurs’ pick and roll work efficiently. Without him, untested or role wing players like James Anderson, Daniel Green, and Gary Neal will have to step up their games and fill in. Ginobili’s absence will give these players the opportunity to mature—hopefully quickly—and gain some needed experience for the playoffs. Playing without him, however, places a heavier burden on the rest of the team than Coach Popovich surely wants.

Although early in the season, none of the other teams in the division seem to be off to particularly good starts either. The defending champion Mavericks have struggled out of the gate, perhaps from a championship hangover, perhaps from some chemistry issues from new personnel. The other teams in the division do not seem capable of mounting a challenge to San Antonio and Dallas, so hopefully the Spurs can manage to win enough games in Ginobili’s absence to hang around for his return and then make a push into the playoffs.

For what it’s worth, the Spurs are among the highest scoring teams in the league, ranking 9th with 99 points per game. They are 13th in points allowed, giving up 94.4.

Coming up, the Spurs take on the mediocre Golden State Warriors, the defending champion Mavs, and the high-scoring Nuggets, so it will be interesting for Spurs’ fans to see what direction the team takes with #20 out of the line-up.