Summer Garden Suffering From Heat and Lack of Rain 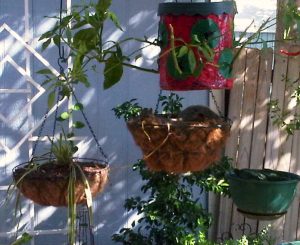 Well, as if temperatures of over a hundred for  . . .  how many days in a row is it now? And no rain whatsoever for three weeks and that last effective storm was the first in months anyway  . . .  If all of that wasn't enough to put a roadblock in my attempt to bring back my back yard from the near-desert that the cold snap in January, and the stray dogs that my daughter rescued from the streets last fall  . . .  now there is something else, critter-like. Something is willfully and deliberately savaging the hanging airplane or spider plants, that I have planted in coconut-fiber lined wire baskets, and suspended from various trees or from hooks on the edge of the back porch.

In all the time that I have had hanging spider plants in my yard, nothing much ever got to them except perhaps extreme cold. They went on putting out long green leaves, and long green stems with four or five daughter plants sprouting on each one, as long as the water kept coming. The cold snap killed all the ones I have, saved one, which had just begun to put out tentative leaves again. And I had bought a huge airplane/spider plant at HEB, at the very beginning of the current campaign – there were actually three plants in the pot, so I cut them apart and re-planted them, and they were doing just fine until about a month ago.

Suddenly I began to notice cut-off leaves on the ground below first one, and then another. Every morning, a few more, and then the stems with the daughter-plants, lying wilted on the ground – and something had been eating the tender base of the plant, straight down to the roots. And then, digging up the parsnip-like roots; the only think to do was to hanging them from hooks in the porch ceiling, where the something with sharp teeth responsible for all this destruction would have to walk – upside down across the underside of the roof and then rappel down the suspending hook and chains. Of the five airplane/spider plants that I had – two survivors and the three new ones, two have been all but demolished, one has been nibbled down to the core, and two are – as yet, relatively untouched. The neighbors and I are speculating that it must be the heat and the drought, driving something into eating plants that were heretofore left unscathed.

To add additional insult, the topsy-turvy planter full of thriving Bell and cayenne pepper-plants was also viciously attacked by this same sharp-toothed instrument of destruction. Three of the four Bell pepper plants were eaten off, down to a length of the central stem – every leaf and shoot, just like that, and the rest were nibbled upon. So, there goes that hanging container to another spot underneath the porch, where it would take the rodent (or possibly marsupial) equivalent of Spiderman to get to it. The peppers are all putting out new leaves; a reassuring development, but I am beginning to run out of secure places to hang the plants at risk. And meanwhile, one of the squirrels seems to enjoy just hanging out, in one of the empty hanging baskets.

Now, the tomato plants in the topsy-turvy containers are going like gangbusters – they are bigger than any other tomato plants I have ever been able to grow here in San Antonio, and they have lots of flowers on them, but so far, no evidence of tomatoes  . . .  so far. My fingers are crossed  . . .  and the ones on the other hand are crossed that the rat or opossum will not start to nibble on the tomato plants, next. That will really be just too much.