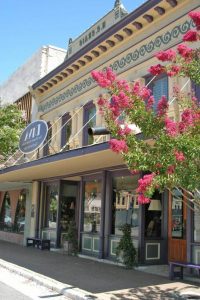 On the road again, last week for a book festival at Sun City, Texas* . . . which is out on the sun-baked flats of grassland lightly sprinkled with woods, away on the edge of Georgetown, about half an hour's drive north of Austin. We have heard dire things of Austin's rush hour, so in order to get there in time, Blondie and I arose at the crack of dawn . . . actually 4:00 AM, plotting to have at least a couple of cups of caffeinated beverage in us and be ready to roll at 5:00 and thus be well-through whatever hellish traffic jams that Austin offered in the morning rush hour. With our luck, we could have given it another hour, for we arrived just before 7:30, to set-up my table in ten minutes flat, and the fair didn't officially open until 9. Yeah, we could definitely have slept for another hour – except that everyone that we met, setting up in the Sun City community center ballroom assured us that, oh, you just never knew with Austin traffic. If we had delayed leaving until about 6 AM, guaranteed there would have been a terrific pile-up and we would have been delayed well-past time.

Another Texas indy-author told me about the Sun City book-fair, stressing that it was just the kind of event and venue well-worth the time and tank-full of gas needed to get there. Sun City in Georgetown is a active adult planned retirement community, of people who are presumed to have considerable financial security and of an age to be still quite fond of reading books, thank you very much. Blondie still had serious doubts about that, at the wheel of the Montero, and grumbling slightly as we followed the Tom-Tom's direction – all the way past all the exits for Georgetown and onto a two-lane road apparently leading nowhere in particular. She said at least once that it didn't look like there was very much out there at all, but pastures and windbreaks, interspersed with the occasional double-wide with the customary rusting accoutrements, but after about three cross-streets, there we were . . . and oh, my.

We followed the directions scrupulously, along an avenue adorned with landscaping, trees and wide paved footpaths that meandered through it, past cottages and mansions artfully set about, so as to give the best appearance and views. There was a distinctly uniform look about them all, though – in general style and color, although not actual design. There were also no fences along property lines – each yard merged gracefully into the next – and then we came to the community center, likewise beautifully landscaped, and Blondie and I agreed that it all looked very much like what a military base would look like, if the powers that be had unlimited funds and no military mission at all. It's a beautiful community, I'd hasten to admit, and the people seemed very lively and pleased to be a part of it, but it did have very much that centrally-planned look. 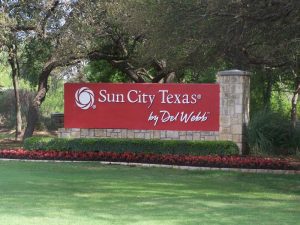 I can't say enough nice things about the organizers, or about the residents who came drifting through, many of whom were eager to talk about books – really, I think my throat was raw from talking so much. I sold enough copies of my various books to make back expenses and then some, there was a considerable uptick in the Kindle and Nook editions afterwards and I met a couple of people who were interested in the Trilogy and involved in the Williamson County historical society who would like to have me come back for other events. Well worth the trip – but I don't think I got over the exhaustion until today.

*Sun City is the first Dell Webb age restricted community in Texas; for active adults with a passion for life. For recreation you'll enjoy three championship golf courses, a world-class fitness center with tennis and swimming, plus miles of walking trails. The activity center offers art studios, a woodshop, computer lab, Billiards hall and meeting rooms for clubs and classes. Hill Country Retreat is another such Dell Webb active adult community, but in San Antonio.
Posted in San Antonio Attractions
no comments yet
Comments on this entry are disabled
Like or Share
Loading likes...