Sunday Afternoon at the Dog Park

Sunday Afternoon at the Dog Park with the Lesser Weevil 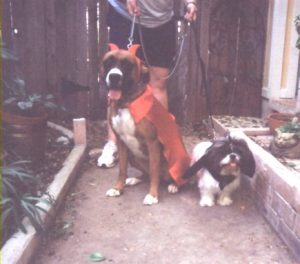 There is a dog park, hidden away in the back forty of McAllister Park, a sprawling public park/semi-wilderness area in Northside San Antonio. It is formed by a large fenced area of trees and shrubs, dotted with benches and a number of trash cans and dispensers offering what my daughter describes as ‘poopy-bags'. A paved path leads around the perimeter of the fenced area. Another long paved path leads from a parking lot: on any given afternoon when the weather is fair and mild, and most especially on weekends, that path is alive with leashed dogs and their people. The dogs are normally wild with excitement, heading toward their social-hour, play-date and mad-minute. It must be something they look forwards to all the rest of their limited, doggy lives - if they are capable of retaining a pleasurable memory. 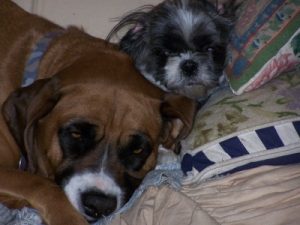 One of our neighbors told us about the park; admittedly, we were nervous about the whole off-the-leash concept with regard to the Lesser Weevil. We have no apprehensions about the Weevil and humans - it's other dogs. Now and again in the early months, she took an instant and abiding dislike to another dog on a leash. But our neighbor assured us, over and over - that it is all right, the dogs seem to govern themselves very well, off leash, and the more there are of them in the confines of the park, the better they all behave. So we took a chance - and we stuck very close to her that first time, and waited until she had behaved well with the first half-dozen dogs that came romping up for a bit of friendly butt-sniffing. 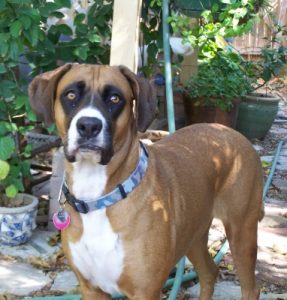 Weevil still does not play as uninhibitedly with the other dogs as others do. She'll chase a thrown tennis ball and run races, but she will stay fairly close to Blondie. And Spike the Shi Tzu basically attaches herself to my ankles, never going much farther than ten feet away, even if there are other small dogs who want to play with her. It was quite lively this last Sunday; not least because it seemed to be Big Dog Day. Sometimes people tell us that the Weevil is a big dog; no, she actually is rather agreeably medium-sized. On Sunday she looked positively dainty, next to a Newfoundland the size of a small sofa, two mastiffs who topped out at a couple of hundred pounds each, and a Great Dane who looked big enough to put a saddle on and ride like a horse. No kidding, the Great Dane's nose alone was bigger than the smallest dog present - a four-month-old Chihuahua puppy, too small to be put down on the ground, among all those specimens of canine gigantism. 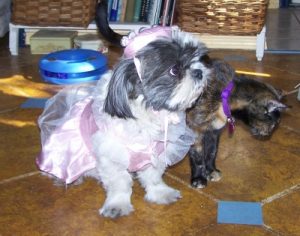 And of course, the Weevil behaved herself - how could she not, when the whole place was seething with dogs; dogs running, chasing tennis balls and each others' behinds, begging to be played with and petted, and romping in front of, or behind their people making a slow circuit of the path around the park? No, it was a good day and good for her - and kind of a relief to know that Blondie has trained her to obedience well enough to trust her off the leash and with a large number of other dogs.