Tacos Till 4 AM at Ericks 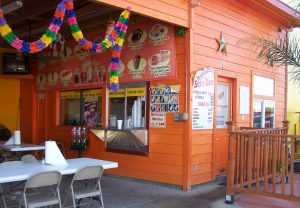 While I’m not nearly as willing as Anthony Bourdain is to risk my health eating exotic foods in . . . ummm . . . exotic and off the beaten track venues, and I certainly draw the line at consuming tid-bits that I would have to muscle past my gag-reflex . . . I’ve always been pretty adventurous about street food, and taking a chance on a restaurant venue that may not look all that promising and first or second glance. I will always remember the little Chinese restaurant in my hometown – a tiny wooden shack, with peeling paint and a sagging roof, which appeared as if a good sneeze would bring it down all together. 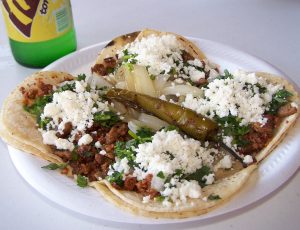 We went past it for years, assuming that it was the kind of place where you’d get ptomaine poisoning from the water glasses, until finally we had just heard too many glowing recommendations from friends, who insisted, positively and over and over that it was the best Chinese food in town, ever! We ventured in, at last – the place was shabby on the inside, but scrupulously clean, and the food was divine – crunchy, spicy, savory, crisp, aromatic, perfectly flavored – everything that good Chinese food is supposed to be. It was even good as leftovers, warmed up the next day. 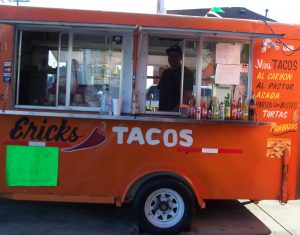 So – lesson learned: pay no attention to what the outside looks like. And we learned the lesson again, after having driven by Erick’s Tacos on Nacogdoches for I don’t know how many years. It’s next to Cordova Auto, which is mostly painted vivid yellow – but Erick’s is painted a shade of vivid orange that you can see vibrating against the inside of your eyelids for some time after you close your eyes. The dining room of the original Erick’s is a group of folding tables and chairs in an open bay that was part of the garage, although there is how a nice little patio area adorned with potted palm trees. The cooking is done in a taco truck parked on one side – and the drinks and fruit cups and ice cream bars are served from a tiny enclosed area on the other. The menu is basically Mexican street food, sort of like La Gloria Ice House, but without a shred of pretensions to atmosphere. Heck, the atmosphere consists of looking at the traffic on Nacogdoches, but oh, the food . . . 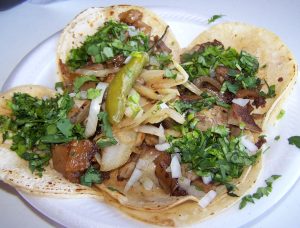 I tried out the special, which was pork carnitas, and my daughter had chorizo con bifstec, which came with lashings of fresh cilantro, and crumbled cheese and sautéed onions. The menu is painted on the side of the truck, essentially. Both of our orders were served up on tiny corn tortillas, doubled – so as to have something to scoop up the goodness that fell out, as we ate. There weren’t many other diners on the evening we ate there, but we were early. It’s open until four in the morning, apparently. They have also just opened an indoors extension of Erick’s, in a little house next door which used to be something else. Perhaps they have something like a proper menu inside, but if they do, it’s probably just as good. 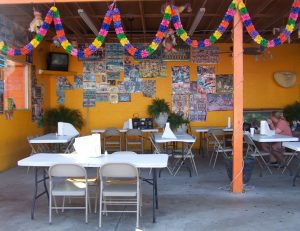 But beware of the green condiment sauce, and add it judiciously. That’s the stuff that is a pale creamy green, which at first glance might look like guacamole. It’s not – it’s nuclear fission by the spoonful.