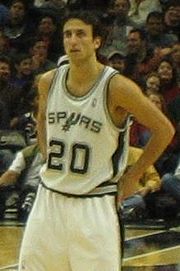 For Spurs' fans, the finals of the Olympic basketball tournament must have been a conflicting time.  On one hand, Team USA rolled to the gold medal that eluded them four years ago in Athens, and put American basketball back on top of the world.  On the other hand, the players representing the home town team were playing for the powder blue of Argentina.  The San Antonio Spurs are like the UN of the NBA: there are so many nationalities and countries represented, that allegiances are sometimes tested.

Regardless of whether San Antonio Spurs fans were cheering for the home town boys' Argentine team or for the USA when the two squads met late in the tournament and Manu Ginobili went down with an injured ankle, gasps were heard all the way from Beijing to Buenos Aires, and from San Antonio to Bahia Blanco.

Spurs fans know that with Manu in the line up and at full strength in last years’ NBA Finals, the Spurs stood a very good chance of knocking out the Lakers, and advancing to play the Celtics.  However, Ginobili’s bad ankle perhaps cost the team that chance.   To see him go down again in the Olympics with the same problem was a nightmare scenario for San Antonio.

Ginobili and the San Antonio Spurs do have some time to heal before the season kicks off, but starting off the season on the wrong foot is not something that San Antonio fans had in mind. . .

As far as USA basketball was concerned, the 2008 Olympics were a rousing success.  The Americans routed each team they played until the finals, where the Spanish team gave them all the wanted.  Earlier in the tournament, the US team beat Spain by almost 40 points in one of the most lopsided games of the Olympics.   In the gold medal game, the Spanish came prepared to play.

With as little as three minutes left to play, the outcome was very much in doubt.   Pau Gasol hit a jumper to make it a five point game, but just a few seconds later, Kobe Bryant hit a three pointer and got fouled.  Spain wasn’t done, as they countered with a 5-0 run to draw the lead back down to 4 points with just over two minutes left.  A Wade 3, followed by a layup by Bryant almost sealed it and the Spanish were forced to foul.

For the US, it was a team effort, and the antithesis of 2004, where Larry Brown led Team Bad Karma to the bronze.  In the end, the Americans were pressured, and their teamwork paid off this time with a 118-107 win, and the gold medal.