The Alamo in downtown San Antonio

The Alamo in downtown San Antonio 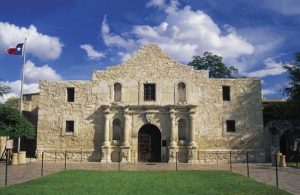 Deep within the heart of downtown San Antonio lays an infamous part of Texas state history.  More than 2.5 million individuals a year visit “The Alamo” on a yearly basis.  This 4.2 acre historic piece of land is essentially the resting place of the 300 year old mission where a small fraction of native Texans found themselves holed up for a full 13 days against the Mexican army, headed by General Antonio Lopez de Santa Anna in 1836.

Many remember the stories of James Bowie, William B. Travis, and David Crockett who fought gallantly despite what would be obviously grim outcomes.  Yes, although the defenders of the Alamo lost the battle and inevitably their lives, The Alamo has become something of a symbol of courage against impossible odds and a staple for the undeniable Texas spirit of valor.  Many of The Alamo’s visitors feel a deep rooted connection with this historic landmark and it is no wonder that many individuals do indeed, “Remember the Alamo.”

The greatest part of this location, aside from being able to see and touch a pivotal moment in Texas history is the fact that The Alamo is free to visit.  Since 1905 The Alamo has been headed by the daughters of the Republic of Texas and only receives monetary funds from governmental agencies, patron donations, and money made from the gift shop. The Alamo is also open all year around with the exception of Christmas Even and Christmas Day and rests in the Alamo Plaza.