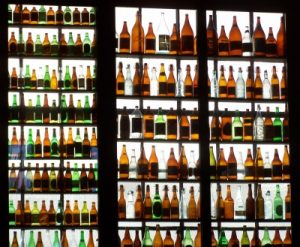 So, once the Halloween decorations were sorted out and put away, we could think of nothing better to do than to drive up to New Braunfels on Sunday morning to join in the Wurstfest 2009 celebration. What better place, and what better day is there to celebrate suds, sausage and song than in a small town, in a park by a cool green river, and on one of those gloriously cool autumn days? Music and revelry, carnival rides for the kids, and plentiful seating, under the pecan trees, or in the big and little tents, or the main hall. 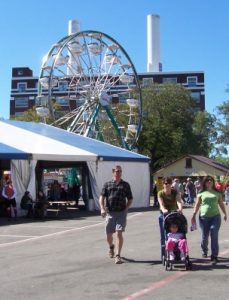 Wurstfest is one of those gloriously scrambled ethnic holidays that can only happen in the US – and possibly only in Texas. For sure, it might be the only place on earth where you can see a woman wearing a dirndl and cowboy boots, or have a serving of nachos and cheese with sauerkraut, while listening to an oompah band play the National Anthem, followed closely by the chicken dance. A huge beer stein in the main hall features – you guessed it, a painting chickens dancing. 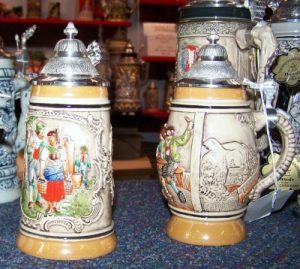 Besides the official leitmotif of sausages in every form – and there practically is every other variety of meat-onna-stick known to man available, the food vendors also have a wide range of fried stuff; regular fairground things like funnel cakes, but also deep-fried pickles and a delight which about made my arteries close up just to consider it; chicken-fried bacon. One of the vendors, the New Braunfels Smokehouse is well-established, but most of the other food vendors were run by local booster clubs and associations, like the Little League, the Canyon Lake Masonic Lodge, and the various Lions Clubs. 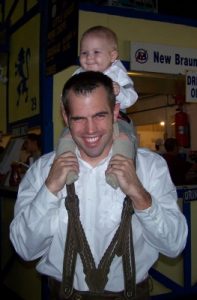 Of course – beer is the second official leitmotif, by the glass or the pitcher. New Braunfels was the second town established in the mid-19th century by a massive influx of German settlers brought over by a well-meaning, but ultimately disorganized group of nobly-born philanthropists. The Germans – those who survived the journey and the vicissitudes of the frontier – brought along an appreciation for arts, culture, and technology – and straightaway set to producing beer.

It is only fitting that one of the largest, if not the largest collections of beer bottles in the world is permanently housed on the Wurstfest grounds in the Spass Haus, which is either a museum cunningly disguised as a bar, or a bar cunningly disguised as a museum. In either case, no one dares begin to sing “9 hundred, 99 bottles of beer on the wall,” because they’d be there for at least the whole run of Wurstfest. The bottles are from all over the world; the oldest American beer bottles are from the 1840s. 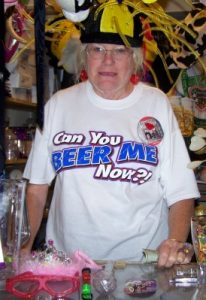 And finally – it’s hats, some of them very strange; hats shaped like chickens seemed to be awfully popular, I spotted one shaped like a beer keg with a spigot on the side, another shaped like an over-flowing stein, (which really came from Germany, the wearer of it informed me) and the hat with a number of green tentacles on it also seemed pretty popular.

Wurstfest runs until Sunday, November 8th, not only at Landa Park, but throughout New Braunfels.