Eating on the Go

Search us online for San Antonio Homes for Sale 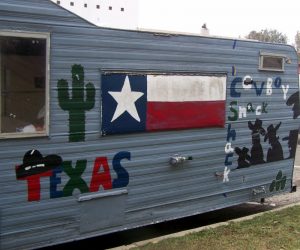 Well, there is fast food, and then there is fast food – fast food that comes to the customer. When I was stationed in Korea such a convenience was called the 'chogi' truck, or as the local national employees called it 'roooch-coachie'. It came around mid-morning to the building where I worked, dispensing hot sandwiches, snacks, candy bars, ice cream and bags of salted or sugared snack foods. But the chogi truck is to a food truck today as a Model T is to a Jeep Cherokee. They're gasoline-powered motor vehicles, and they dispense food to the hungry ... but the 21st century food truck tends to be a specialty gourmet kitchen on wheels. Certainly in a large and built-up city, there would be lots of hungry lunch-time customers. 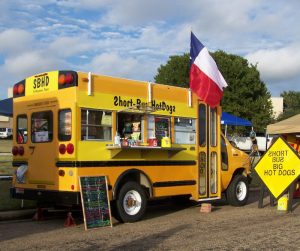 Quite likely, a good number of those hungry workers would have exhausted all of the available and nearby restaurants and fast-food places. It's an expensive and time-consuming operation, opening up a new restaurant in a profitable location in the big city. Conventional wisdom has it that the odds on a new restaurant venture failing within the first three years of operation are fairly high – so starting small with a food truck is a logical solution. Without the huge start-up expense of real estate and a building – all the budding chef-entrepreneur needs is a kitchen on wheels, a map of the city - and one which permits food trucks to park on streets relatively unhindered - and a lot of hungry customers. These days, it also helps to have a Facebook page. 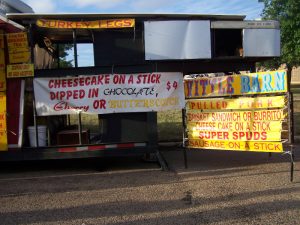 Food trucks have a relatively long history, as these things go. According to the invaluable Wikipedia, the mobile kitchen/canteen had it's origins in Texas – in the chuck-wagon developed by Charles Goodnight for use on the long-trail cattle drives after the Civil War, when the Transcontinental Railroad had pushed far enough into Kansas to make Texas cattle profitable in the larger markets of the East. From the horse-drawn chuck-wagon, came lunch trucks, which provided meals to shift-workers in the big cities, especially those working the night shift around the turn of the century. This trend continued, of lunch trucks serving meals at construction sites, and setting up at fairs and festivals. The US Army maintained mobile canteens – kitchens on wheels, which are most likely the direct ancestor of today's food trucks. 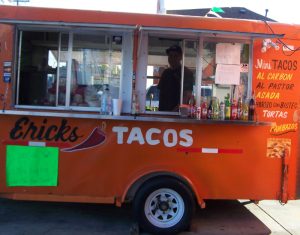 According to the same source, the current popularity for food trucks coincided with the economic downturn; a plentitude of food-trucks with no construction sites to service, and a similar glut of hopeful chefs with no restaurants to work in. Necessity makes opportunities – and in this case, a very useful one. Out on 281 and Thousand Oaks, outside the 1604 Loop, a far-seeing local entrepreneur established a sort of gourmet food park – the Boardwalk on Bulverde, set aside for food trucks and customers to meet, greet, and eat. My personal favorite food truck is permanently parked on Nacogdoches, next to the Cordova Auto Center; Ericks Tacos, which has Mexican-style street food to die for and funky street-dining atmosphere to spare. Oh – and look out for the green sauce; nuclear fission in a small plastic cup. On a book trip up to Abilene, we ran across Short Bus Hot Dogs – which is a hotdog stand set up in a converted school bus. And yes, they have a Facebook page. Charlie Goodnight didn't have any idea of what he set in motion, in 1866.