The Rain it Raineth

Here in San Antonio, hardly anyone has an umbrella...

...On the just and on the unjust fella.
But mostly raineth on the just,

Because the unjust steals the just's umbrella! 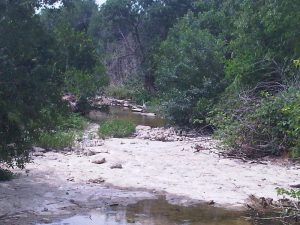 Or so runs the traditional couplet – here in San Antonio, hardly anyone has an umbrella, a proper raincoat or galoshes, because the worst rainstorms always seem to arrive unannounced. You might as well just resign yourself to getting wet, like we did over Memorial Day weekend. We hadn't planned on doing anything for the weekend anyway. The thunderstorm woke me up when it blew in during the wee hours, the morning dawned dark and dreary, and the dogs were disinclined for walkies, so we were even less inclined to go anywhere, until it cleared up in the late afternoon. 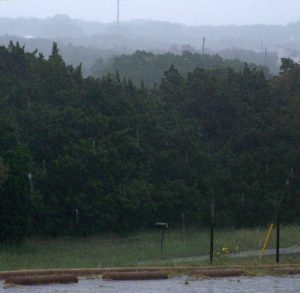 That was when news stories and pictures of high water in downtown and in the parklands behind the Olmos dam, and in Breckenridge Park finally came to our attention. Oh, dear – another one of those places prone to flood are deep enough in water to draw the attention of local, national, and even international news outlets. How can I put this gently – it does rain in Texas, sometimes hard and long, and with flood-productive capacity, although thanks to a half-century of Hollywood movies and television, the national (and international) mental image of Texas as a waterless desert. 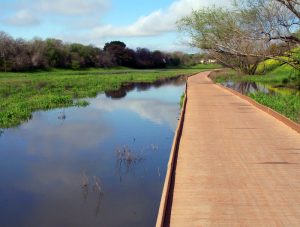 This might be true of West Texas; East Texas is as soggy as any other place in the Deep South. But San Antonio has its own problems with water. In some years, a shortage of it reduces home-owners to watering their lawns with a hand-held hose, while in other years it is entirely possible to drown in a sudden storm surge on a street within city limits; even without having taken the ill-advised step of driving around the city barriers, or going to muck about in the usually-dry-but now full-running-and-overflowing neighborhood creek-bed. San Antonio is still at an outstanding danger from flash floods. I cannot say that too often enough, although the danger of death from them is much diminished from former years, thanks to civic and engineering enterprise. The elementary thing about flash-floods is that they are – flash floods. They hit without very much warning, sometimes as a result of rain which has fallen miles or even counties away, and at intervals so irregular as to lull residents into complacency. 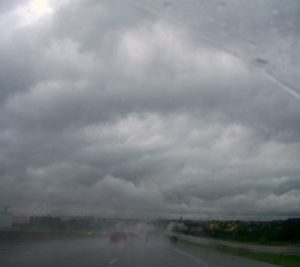 Into the 20th century, downtown San Antonio was prone to catastrophic floods; the establishment of the Riverwalk was an effort at control. It's worked out very well, ever since – but this dear and rambling city still has water hazards. Those sections of highway downtown which run below ground level will flood. Given sufficient rain, the 281 north of the Olmos dam will be under water as well, and the stretch of North New Braunfels which runs through Alamo Heights will be running with water. Regular commuters will know the places along their route which can and will accumulate deep water. Most of the really potentially dangerous places along our surface streets are marked with bright yellow flood-gages, marked off in one-foot increments. There is a reason for this; a water level at or just above the underside of your car has a very real potential to lift your vehicle and float it away. The surface of your tires which actually touches the road, which gives you braking and steering control is only about the size of your hands (if you have big hands!) and once your wheels no longer touch the road, the best that you can hope for is that your vehicle lodges against something firm, and that rescue is not too long in coming. Never go around barriers to drive through a flooded area, be aware of those places which will flood, pay close attention to flood warnings, and know that those mostly-dry creek beds which meander through the greater part of our city will soon be full of very fast-moving water in the event of a large amount of rain upstream. Word to the wise – stay dry, San Antonio!