The Royal Wedding - A Wedding in the Old Country

A Wedding in the Old Country

No, of course I did not get up hours before the crack of dawn on Friday to watch the royal wedding. I wouldn't get up at four o'clock in the morning for my own wedding. But we did watch the highlights Friday evening when the BBC news wrapped up with the highlights. Just as a personal observation, it all seemed rather nice and tasteful, modest, even . . . with the exception of whichever one of Fergie's daughters was wearing the a hat with a two-foot tall bow on it, towering over her head, and half an inch of black eye-shadow around her eyes.

I guess no one had the nerve to say, "Young lady, take off that ridiculous hat, and here's some cold cream and a wash-cloth - you are not going out of this palace, looking like a cross between a Carmen Miranda and a raccoon!" Ornamenting the stone garden of Westminster with lines of real trees in leaf was very pleasing - and again, modest and understated. And the bride's dress looked for all the world like the one my mother wore when she and my father married in 1953 - the long-sleeve and high-neck bodice of lace overlaying a satin skirt and short train. Hoping that this trend for modest elegance and understatement will set a trend in bridal fashions in the near future - but this may take at least a season or two.

Anyway, we did celebrate, by going to the Bit of Britain tea-shop on Jones Maltsburger around mid-day for their day-of-the-wedding bash; they were going to have a block party - which was actually laid out on tables, underneath the oak trees at the side of their new digs. Bit of Britain used to be known as British Sensations, when it was out in an old house in Bracken Village. Now it is housed on the ground floor of a Colonial-style brick block - very much more convenient to people longing for a taste of things like Bovril, pickled onions, McVittie's biscuits, bangers and HP sauce - many of which are now on sale in a mini-grocery, while the serious tea-consumption goes on in two other dining areas.

But on Friday, it was all happening outdoors, where fortunately, it was the perfect day for it. A fresh breeze, a convivial gathering . . . and a real tea, the kind made from PG Tips, and served hot and with milk and sugar, accompanied by cucumber sandwiches, egg-salad sandwiches - all freshly made that morning - and traditional British wedding-cake, which is actually more like what we would know as fruitcake, with citron and currents, topped with a layer of marzipan. The tea kept coming, and so did the guests, many of whom felt obliged to wear garden-party hats. 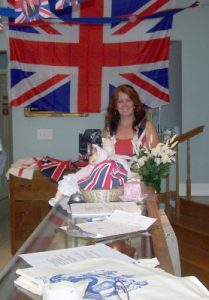 The proper way to make tea, by the way - is to use a strong-flavored loose tea from India, a teaspoon+ of tea for each serving plus one more one for the pot, water that has just come onto the boil - and to warm the pot with a splash of boiling water, first. Then pour out that splash of water, add the tea, and fill up the rest of the pot with boiling water. Steep for about five minutes, and serve with milk and sugar. The morning drink of the gods, and what sustained an empire. All clear? Good. Maybe sometime soon, I should explain the rules of cricket . . .