The People's House and Senate 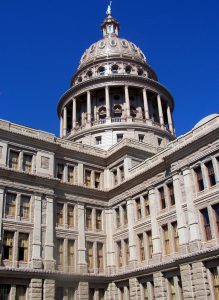 So – after a two-hour long stint in the Texas Author's Association booth at the Texas Book Festival this last weekend, my daughter and I decided that we should explore the grounds of the state capitol building, which reared up at the top of the hill just outside the tent where the booth was. No kidding – the tent was at the intersection of North Congress and 11th, just in front of the gate to the grounds ... which looked cool, green and inviting, after two hours in the hubble-bubble of commerce. 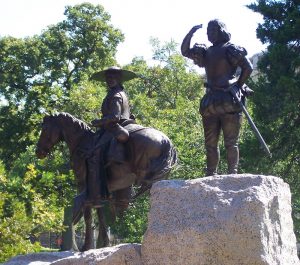 We put the two tubs of books in the car, and walked back from the public parking structure on San Jacinto, past the state archives and the statue-topped obelisk monument to Hood's brigade ... that unit which was slaughtered almost wholesale at Gettysburg. In my Adelsverein Trilogy, one of the characters, Peter Vining, is a survivor of that, the only one of four brothers. Most Texans who joined up to serve the Confederate military actually never went east of the Mississippi, but Hood's brigade and Terry's Rangers did, and paid a very high price in blood for the privilege. 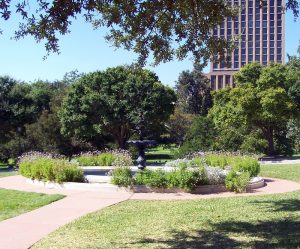 I had always assumed that the capitol building was white, of that pale limestone that weathers to ivory – and every time I had seen it from a distance, it certainly looked white or ivory, but it seems that the whole thing is faced with salmon-pink granite. At a distance it looks beige. It is the fourth capitol building to stand on this particular site. 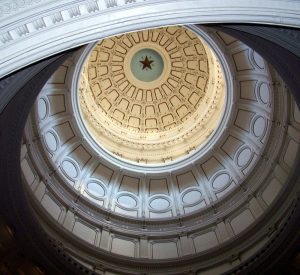 The capitol of independent Texas was a peripatetic matter for some years, being lodged in Washington on the Brazos, Columbia and Houston, among others. This one had the good fortune to be built in the last quarter of the 19th century – which to my mind was one of the best-ever for constructing grand public buildings which imposed and impressed with the importance of the work done in them, yet delighted the eye with detailed adornment ... and yet have managed (with sensitively-done updates, including a huge below-ground-level element at the back so as not to interfere with the view) to be functional and perhaps even uplifting to work in. 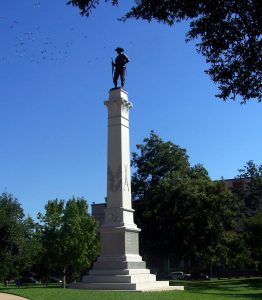 Certainly better than some featureless slab of concrete, I-beams and glass, fitted out on the inside in endless offices and cubicles painted institutional beige or pale green. The Capitol building in Austin has class, panache, and a sense of history about it, what with the huge painting of Sam Houston accepting Santa Anna's surrender on the field of San Jacinto, with everyone who was there at the time (and apparently a few who were not) in the audience. The names of the great battles of the war for independence, the war with Mexico and the Civil Ware are inlaid into the floor in granite terrazzo – and the floor under the great soaring dome features the inlaid seals of every country which laid claims to Texas. Away up under the very roof of the dome is a tiny spiral staircase, almost hidden against the wall; I suppose it goes to the very top of the dome, but as interesting as it looked – I would not like to venture up to it. It's not heights that I dislike, particularly – just the prospect of possibly falling from them.

The terrazzo on all the floors of the old Capital was done at the time of the Texas Centennial in and about the mid-1930s. For a couple of the motifs, especially one on a particular second-floor stair mezzanine, we really did wonder exactly how innocent a time that was ... and how many people had noticed immediately what we did about one of them. We did ask one of the DPS agents about it, as we left the building. She said that it wasn't anything of the sort – just an artistic design. But we do have certain doubts.