Time in the Vegetable Garden 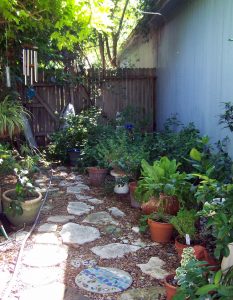 I look at the pictures that I took in the early spring, and I can hardly recognize my yard. A bitter winter freeze and various large and small animal depredations had pretty much laid waste to it for the last year or so ... but what a difference five months have made! And a half-truckload of free mulch. And $65 dollars worth of timber and hardware from Lowe's, and approximately $200 spent here and there, at the Antique Rose Emporium, HEB, and Sam's Club for vegetable starts and premium potting soil and one or two other essential items. Considering that these expenses were spread over four months and between two of us, it's not very much at all. The back yard garden looks good enough that I can invite people to see it, without suffering acute embarrassment. 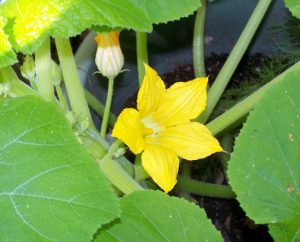 The squash plants are spreading near and far, blooming luxuriantly – but so far, only a handful of tiny, inch-long squash. Note to self: Self, plant the squashes against the fence and give them plenty of space, as they seem to want to sprawl all over. The eggplants have fat purple and white blooms on them, but as yet, no embryonic eggplants, but the okra ... a couple of incipient okras. Or is the singular of okra 'oke'? Curiously, the pepper plants from last year are doing rather well, especially the one jalapeno planted in a separate pot 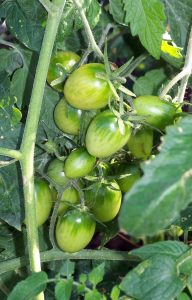 The most important item is – the tomatoes. We have three topsy-turvy planters, each with two plants in them, hanging from the top tier of a home-designed and built frame, suspended from two branches of the mulberry tree in the back yard. The plants have grown down, and the eight tomato plants in earth-boxes and self-watering pots below have grown up, supported on tomato cages ... into one productive tangle. There are clusters of jade-green tomatoes everywhere, but it turned out that the tomatoes were irresistible to something with sharp and indiscriminant teeth. I suspected that the same critters were the same who raided throughout last year. They nibbled half of my hanging airplane/spider plants to death, digging up and digging up and eating the lush, juicy tubers that made the root network of the plants. The same hungry critters also ravaged the hanging turvey-planter full of peppers. We finally had to hang the pepper turvey from a hook in the center of the back porch roof, where the rats would have needed rappelling ropes and one of those hook-shooting thingys beloved of espionage thrillers to climb vertically from the edge of the roof to the pepper-plants. 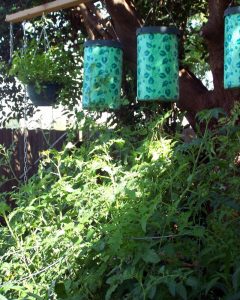 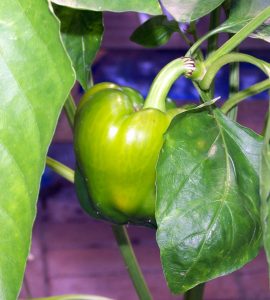 And they did it in the last week or so, but this year we were out of patience with seeing our potential crop from this garden reduced by freeloading anything ... birds, caterpillars, rodents, freeloaders of any phyla. We hates them, so we do my precious, we hates them! This year we set out baited rat-traps, and the first couple of rats caught in them were so big that they were ... just maimed, which we did feel a little guilty about, but not much. The rats caught since then have been increasingly smaller and stone-cold instantly dead ... and the tomatoes, peppers and hanging plants have since been unmolested. Still – the traps go out, every evening for another week or so. And that was my week in the garden; what was yours?