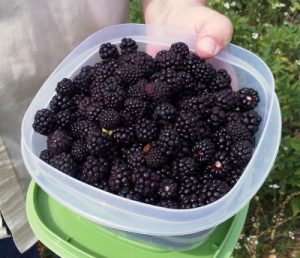 So, last week when we hiked the Salado Greenway Trail along the stretch between Tobin Park and Rittiman road, we noticed that there were a great many thickets of berry brambles, especially in the sunny stretch along Holbrook Road. We had seen a man standing out in the middle of the thickest patch of brush, and asked what he was doing - ‘blackberries' he answered, and held up a plastic Tupperware container nearly full of them. So, this week, I was prepared; Tupperware, and plastic bags, gardening gloves, long-sleeved shirt, long pants - banded at the bottom with rubber bands, and a tube of ointment for treating a close encounter with poison ivy, just in case.

I waded into the tangle of brambles and low-brush at the first place where it looked as if there would be enough berries to reward the effort easily - and oh, my! That's the thing about blackberries; there may be two or three, four or five showing at first glance, but when you start working down below the level of the leaf cover, there are tens more. In one place - and I had not gone more than fifteen paces from the path, I could have stood in one place and filled up a quart-sized plastic container, just with those berries in reach. They are perfectly ripe at present, and being so dry the last couple of months, they are very sweet as well.

And this is what I will do with them - really, not very much more than to wash them gently, and serve them with a version of panna cotta that I found the recipe for, years ago in the Stars & Stripes; it's called Yogurt Cream Mold

Soften 4 tsp unflavored gelatin in ½ cup cold water. Combine in a saucepan over low heat, 1 ½ cup heavy cream and ½ cup sugar, stirring until cream is warm and sugar dissolves. Add softened gelatin and stir until that dissolves also. Remove from heat, allow to cool and stir in 2 ½ cups plain unflavored yoghurt and 1 tsp vanilla. Pour into a 1-quart mold and chill for at least one hour. Un-mold and serve with fresh fruit - any sort will do. For this version, with the fresh-picked wild blackberries, I will make a syrup of ½ cup water, and 6 Tbsp sugar and cook about 1 cup of fresh blackberries in it, until the berries are softened and syrup is slightly thickened. Then add another cup of berries, and a dash of raspberry vodka for flavor. We'll be back, and soon, for they are just now ripe, and probably won't last too much longer.

And we also noticed - there are tangles of mustang grape vines all over the place. I have a friend who makes mustang grape wine - I wonder if he can share the recipe with me, when the grapes are ripe?