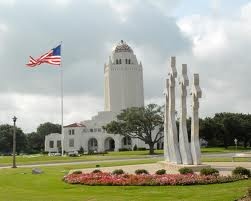 Randolph Air Force Base serves primarily as Headquarters Air Education and Training Command, as well as headquarters for the Air Force Personnel Center and the Air Force Recruiting Service. It is home to the 12th Flying Training Wing, whose mission is to conduct pilot instructor training and combat systems officer training. It is located a little east of Universal City, an independent municipality located north and east of downtown San Antonio. These days Randolph looks as if it is right on the edge of the various suburbs, spreading out along that length of IH-35 which connects Austin and San Antonio, and Loop 1604, the ring-road which encircles San Antonio – but when it was first completed in 1930 it was some distance out in the country. Two parallel runways, with a central tower ringed by concentric avenues and incorporating the very latest architectural design and modern conveniences; the future aerodrome had arrived! The central part of Randolph AFB today, centered around the trademark Building #100 (the so-called“Taj Mahal” tower) is indeed a historical district, having that in common with the older portions of Ft. Sam Houston.

Randolph was planned all of a piece and all at once, unlike many other military bases and posts, which usually come about in an untidy sprawl of bits and pieces, added onto and expanded as necessity, military mission and finances permit. Randolph Field was intended to be the showplace of the brand-new Army Air Corps, created in 1926 by an act of Congress. This act also created two new general officer positions; one of them was General Frank P. Lahm, who was tasked with organizing all flying training for the new corps. No sooner than General Lahm had set up his training command, then he discovered that existing flight-training facilities at Kelly and Brooks Fields were completely inadequate temporary buildings, put up during World War I, and expected to last no longer than a few years. By the early 1920s, the urban sprawl which has now entirely engulfed those two locations had begun to make flight operations difficult, so General Lahm began casting around for a new location: far enough from San Antonio that starting afresh wouldn’t be a problem, and not so far as to be inconvenient. 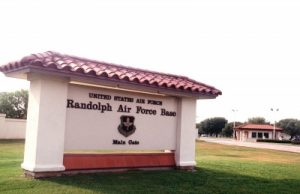 The original plans for Randolph were drawn up by a young officer, 1Lt. Harold Clark, who- although having trained as an architect – was serving as the dispatch officer in the Kelly Field motor pool. He used the back of old dispatch sheets to sketch out his idea of a perfect “Air City,” which he daringly showed to General Lahm. General Lahm was so pleased that he made Lt. Clark the architect-in-charge of the building project. Work was undertaken on the new project by the US Army Corps of Engineers – the largest project they had undertaken since completing the Panama Canal. The entire complex was finished in three years. Ironically, Captain William Millican Randolph, the flier for whom the “air city” would be named, was actually a member of the name-selection committee, when he was killed in a 1928 air crash at Gorman, Texas. (Capt. Randolph is buried in the Ft. Sam Houston Cemetery.) The resulting facility was built in a very pleasing Art Deco and Spanish Colonial style, of hollow-core tile and conblock covered in stucco, with tile roofs. Many were built to standard institutional plans common to the time, but many – like the Taj – were unique, and one-off structures.

Randolph Field was dedicated on June 30th, 1930, and was functioning as the Air Corps flying school by late 1931. The Congressional act which established the Corps required that 90% of the commissioned officers serving in it be qualified as pilots, and so quite early on, Randolph was known unofficially as “The West Point of the Air.” A movie by that name was filmed on location in 1934 – and the overall layout of the field itself was unique, in being designed specifically for military aviation operations.