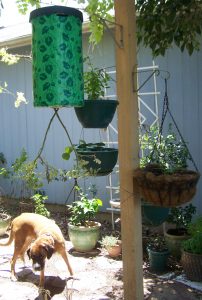 So, round two of reviving the garden has been undertaken, thanks to my daughter finding several of those Topsy-Turvy suspended tomato-pot gadgets at the severely marked-down shelf at the local HEB. You know, those things that are actually a heavy insulated plastic bag, with the tomato growing out of the bottom? Theoretically, it spares having to park them in cages, and the warmth of the sun and the water all get to the roots of the tomato plant, with the result that you have just oodles and oodles of ginormous fresh tomatoes hanging from the branches of the tomato plant hanging out the bottom of the suspended tomato-pot thingy. So, we bought some marked down tomato plants and a bag of extra-nice potting soil, filled them all up, and now there are three of them, hanging from the edge of the back porch.

My daughter anticipates a tomato-bounty, but I am not holding my breath. I despair of growing tomatoes here – in the ground, in a pot, in a box, with a fox . . . the magic of a tomato bounty has eluded me every year. It’s horribly frustrating for me, as I grew them in Utah, in the backyard garden plot! Tons of them . . . well, not tons of them, but a fair number, enough to justify the time, trouble and flat of 2-inch pots of seedling plants. And there is nothing on earth better than a fresh-picked, perfectly ripe home-grown tomato, warm from the sun, just-pulled from the vine, coming away easily into your hand. It’s as if some malignant power has put a curse on my garden here. Other people grow tomatoes: a friend in Alamo Heights grows sweet little cherub tomatoes on bushes that are small shrubs, so many that she gives them away, right and left. Once, when I had occasion to speak to a professor of agronomy at Texas A&M, I plaintively asked him right out, if there was a reason why I can’t grow tomatoes here in San Antonio, and he answered that yes, there was – but he’d have to charge me tuition before he could tell me what it was. 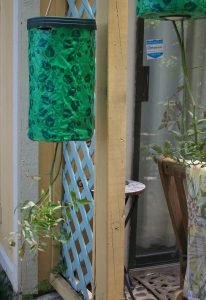 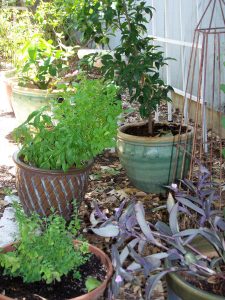 Peppers I can grow here – quite easily. There was actually a seasonal jalapeno pepper plant that happened to take root in a fortunate, south-facing and sheltered place, and thrived for three years. It grew into a fairly large shrub, covered with red and green peppers – in fact, I still have a zip-lock baggie full of them in the deep-freeze. Small lemon and lime trees in pots – they’ve been thriving for years. I’ve had pots of parsley and chive what have gone on steadily, winter and summer, also for years . . . but nothing works with tomatoes. The flowers don’t set, and start producing tomatoes, or the whole plant just ups and withers . . . really, I despair, sometimes. It’s almost less trouble to buy a box from Ernie, the veggie guy who sells produce out the back of his SUV, parked under a tree on the corner of Stahl and Higgens – straight up from the Valley.

But my daughter says that everyone who has tried to grow tomatoes with the Topsy-turvys has been thrilled no end. Sigh. One more time . . .