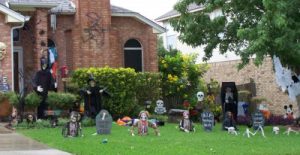 When in the name of all that's unholy, did Halloween turn into an extravaganza of coffins and mock gravestones set up in suburban lawns, and formations of witches plastered onto tree trunks and garage doors, great glowing hanging jack o lanterns, and ghosts and witches and skeletons and huge ass spiders (shudder!) and monstrous webs, and life-sized skeletons? When did decorating the house for the benefit of small children in dime-store costumes or something cobbled together from a stack of torn bedsheets and some Rit dye, panhandling door to door for packets of candy corn and little pastel rolls of sweettarts go so very, very far over the top as - a full Griswald Christmas? It probably happened about the same time that the pattern catalogue for costumes at the yardage store became as thick as a seasonal catalogue and stayed on the yardage store pattern table year around. But it must be fun, since so many San Antonio homes indulge themselves, and others have their yards decorated according to the upcoming holiday anyway. 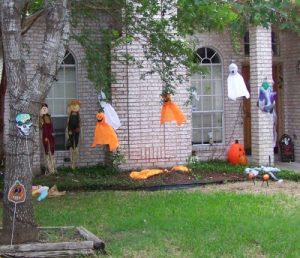 Back in the day, it used to be an innocent, home-made, modest little affair. Mom bought us each a pumpkin, and in the early days Dad helped us carve them with a kitchen knife and scrape out the mooshy tangle of seeds and stringy orange fibers. By the time my brother and I were in junior high, we conducted the ritual pumpkin butchery ourselves, and assisted our younger sister with marking out a scary face in straight-angled cuts. Fit the pumpkins with candle-ends, saved for this purpose in the drawer with the silverware, set them out on the front porch, and there we were, all set. Of all the neighbors in the town where I grew up, only one got ambitious, rigging a ghost of cheesecloth to fly silently down a wire running from the trees by their gate to just above the front door. 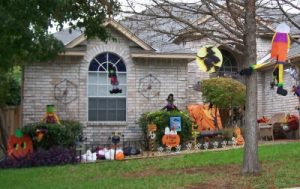 Close to sundown, we would light the candles in the pumpkins- it was really, truly only tricker-treating, after it was at least decently dark, with smothered giggles coming from the front porch, and children in twos and threes working up their nerve to ring a strange doorbell. Usually, there was a parent or older sib outside the circle of porch-light, cuing the chorus of "Tricker-treat!" and reminders to say "Thank-you!" before they romped away, clutching their brown-paper grocery bags of treats. That hasn't changed, nor has the creation of slightly more elaborate Halloween parties, and haunted houses, such as the venerable Nightmare on Grayson Street, in downtown San Antonio. (Nightmare on Grayson opens September 25, 2009 for the 21st year.) 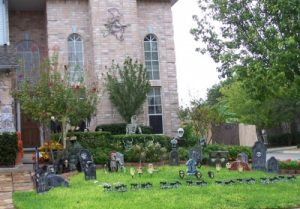 Home-made, kid-made costumes, simple pumpkins, and brown-paper bags- all very simple in comparison, as shapeless and disorganized as a scratch softball game on an empty lot on a summer morning when school is out. Now that Halloween is all elaborate, and organized, like Little League, with uniforms and coaches and formal rules, it may be more spectacular, but I have a sneaking suspicion it may have been more pure fun for the kids then.