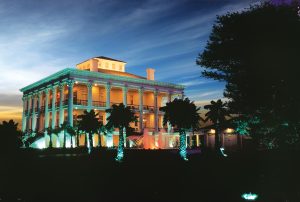 The famous, fabulous, and fantastic Veladi mansion sits on a hill, among acres of mown green pasture, along Route 181, as it passes by Karnes City. This classical southern-style mansion – for which the word ‘palatial’ is perhaps a bit of an understatement – was built in 1994, reportedly at a cost of 8 million dollars. It was modeled after an even larger historic – and now long-gone Southern mansion, Windsor Castle, in Port Gibson, Mississippi. The original model for the Veladi mansion served as a Union hospital during the Civil War, and burned to the ground at the end of the 19th century, leaving only the trademark ground-to-roofline columns remain.

In recreating an ante-bellum mansion in South Texas, no expense was spared; 29,000 square feet of living, entertaining and recreational space, verandas that surround all sides on two floors, 34 rooms, including eleven bedrooms, a disco and a ballet practice space  . . . and a kitchen the size of the average vacation condo. Inlaid floors of wood and marble, fireplaces, 28 ornate Corinthian columns and a cupola that lights the interior stair hall  . . .  landscaped grounds, to include a fountains, gardens pool and cabanas, a tennis court, stables, a private fishing pond, staff quarters and support facilities – everything that the average multi-billionaire needs to live in simple and elegant splendor  . . .  but it was only lived in for barely four years. 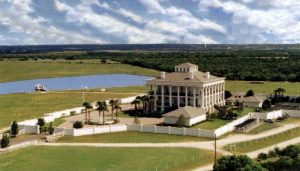 The original owner, Arturo Torres, who made a fortune through Pizza Hut franchises and the Veladi Steak House chain sold it at auction in 1998; too far from San Antonio, he said in newspaper interviews at the time, and his three daughters – Veronica, Laura and Elaine – were all going to different schools. The house is a good fifty miles from San Antonio, in the middle of cattle country and far, far, from any other establishments of similar size or luxury. At that first auction, the mansion went to football franchise owner Woody Kern  . . .  Now it is called Southwind Ranch, and it has now gone on the market again, which is a sad state of affairs for such a lovely and well-appointed house, and much admired for the architectural details, and the sheer lavish luxury of it all – incongruously placed at the edge of a blue-collar and working class small country town. Karnes County is green and attractive as that part of South Texas gets, but certainly no one has ever compared it to the Berkshires or to Beverly Hills, where a mansion of equal quality would pass without remark among so many others.

It is listed with the Texas Film Commission as a potential film location, so there might be a chance for the splendid house by the side of US Highway 181 to be known for something more than being perennially on the market. The Southwind Ranch is currently listed for sale by Hoffman International Properties for $7.9 million.