Wandering Down the Alley

Wandering Down the Alley 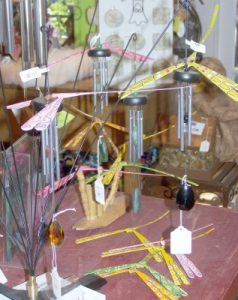 I hadn't been to Artisans' Alley, on Bitters Road just off 281in San Antonio, Texas since I was working a corporate job a couple of years ago. The practice of management was that if the sales team had a really good and profitable month, the sales staff and the administrators who supported them would be treated to lunch and a fine local establishment. On one of these occasions, the choice fell to Bin 555, where we had a quite splendid lunch - alas, since it was the middle of the workday, we had to give a miss to sampling the wines. And a double alas, for Apple Annie's is gone; the place where it was is being renovated to house another restaurant, which will - so they say - open in March or so. 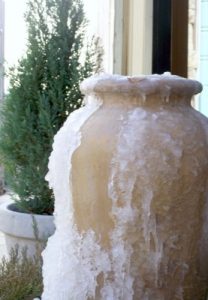 Triple alas - we were there too late for the farmer's market, which is also at the Alley on Saturday mornings, but seeing that it was cold enough to totally freeze the water in one of the patio fountains, we were probably better served by being inside, roaming through what looks like a half-acre of antiques at Back Alley Antiques, full of lovely, lightly aged to well-aged stuff which we couldn't afford. My daughter was entranced by the collection of ladies' hats, especially the concoctions of feathers and fur and a little eye-veil. Yes, there was a time, once, when ladies wore these, along with strings and strings of pearls, white kid gloves, and high-button shoes. The evidence was all around. I discovered that they had reprints of those 1873 birds-eye view maps of San Antonio which were so popular in the 19th century. My own heart is now set on a copy of the 1873 one for San Antonio, my hasn't San Antonio real estate changed?

When we finally tore ourselves away, and ventured into the cold again, there was a gallery with an invitingly opened door; it turned out they were cleaning up after a leak in a pipe, at Painting with a Twist. Which does offer the artistic experience, and lessons in painting; a sort of wine and cheese evening and a personal art lesson, all in one. The bit of art that I liked best, though, was a one-off sculpture by the manager's sister - a very fashionable rhino, enjoying a relaxing hot bath, with a glass of the good stuff. It really was good stuff, it said so on the bottle label. 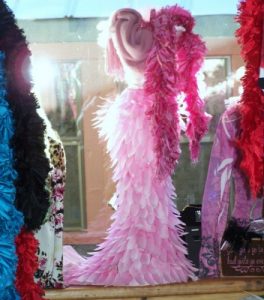 At Gardening Galore, my daughter loved the balancing painted bamboo dragonflies - and the gurgle-jugs - a pitcher in the shape of an open-mouthed fish, which gurgles as you pour liquid out of it. The manager works with an artist who does a very sleek and modern version of this traditional Victorian favorite. They also offer a wide variety of hand-painted ceramics, of the sort that I think of as being garden jewelry. They also stock wind-chimes, of the sort that can be heard for miles, as I accidentally brushed against one and practically deafened myself. 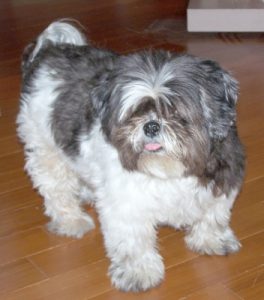 On the way out, the daughter dragged me into Ba Da Bling; "Ohhh, pretty! Shiny! Feathery!" - accessories and cloths and costume jewelry, and flip-flop sandals adorned with bunches of grapes. We were greeted at the door by Harley, who came running out from between the racks. Harley did this for everyone coming in through the door at Ba Da Bling. He is a dog who adores people, but I don't think he'd be able to stand the pace, or the constant excitement of working at a bigger retail outlet.

We'll be back in spring - to check out the new restaurant - and to say hi to Harley. 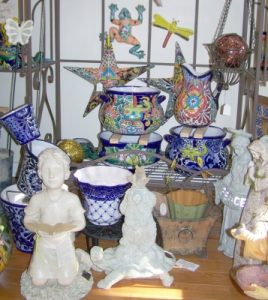 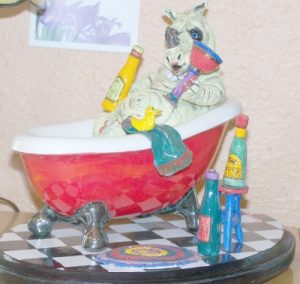 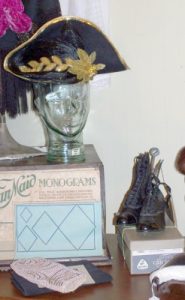