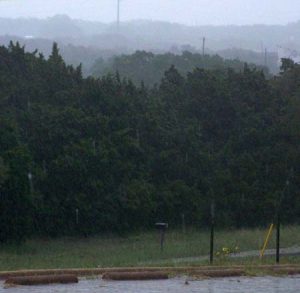 That sprinkle of damp stuff, seeming to fall out of the darkest clouds in the sky  . . .  oh, yeah. They call that stuff rain – that is, when there is slightly more of it than fell on Saturday morning, courtesy of a few stray clouds from the weakest tropical storm ever to hit the South Coast of Texas.  We were watching the weather reports all this week, looking at the charts and radar, and licking our lips, thinking 'Rain – glorious rain! This weekend, Saturday morning at the earliest! Maybe even Friday evening! And no, if it comes with high winds, it's cool – we can adjust  . . .  as long as it brings rain!"  I swear, if the alphabet for tropical storms weren't already established, they could have called this crushing disappointment of a storm, "Tropical Storm Cupcake" . . .  or maybe "Tropical Storm Melt-Like-A-Snowball-In-Heck." And we had such hopes!

There was one single rainstorm some two or three weeks ago, and that was the first in simply months, and meanwhile, we are looking up at the baking hot blue and empty sky, as we sprinkle our lawns (medium-crispy to well-done) with a hand-held hose, and crying out for rain. Well, those of us who have lawns, still. I yanked mine out some few years ago, under a program sponsored by SAWS to encourage low-water usage. I put in xerioscape plants, which were strongly encouraged, for which I received  a credit on the water bill from SAWS which paid my existing water bill for about four months, and a year later – because my water-usage continued low – a gift certificate for a not inconsiderable (to me) sum of money to be used at a local nursery or at Home Depot/Lowes for plants and hardscaping materials  of my choosing to continue the personal domestic landscaping good work . . .  but it's been so dry this summer that even my existing in-ground plants are looking distinctly limp and discouraged.

You see, that's the thing in Texas. Summer is invariably hot, but in most summers, we can count on at least an occasional thunderstorm to keep the gardens, the meadows, the parks and the rest of it all perking along, in a condition that doesn't look like competition for a new location shoot for "Death Valley Days".  I had an old friend, when I still worked at Texas Public Radio, who had lived in San Antonio all of his life, and he insisted that the boiling-hot summers with little rain relief were a recent anomaly. When he was a kid, in the 1930s, and 1940s – the summers were not so boiling hot, and the days and weeks were relieved by rainstorms on a regular bi-weekly basis. That was the historical norm, but the very last summer I recollect like that was a couple of years ago – like clockwork, a storm blew in, and it rained so much that the wildflowers stayed until August, and even into September, the blackland prairie between San Antonio and the Gulf Coast was so verdantly green that a visiting friend exclaimed over and over that it looked like Ireland! Now, that was a summer – and I can hardly wait to see one like it again. In the meantime, here's a picture of a sudden rainstorm up in the Hill Country that I took a year or so ago, just so we all can remember what it looks like, when the rain comes pouring down like one of those expensive spa showerheads for a couple of hours.