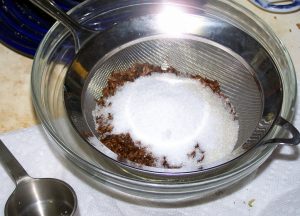 Ours doesn't – in fact, the pile of home-made and ageing cheeses currently takes up about half of the bottom of the refrigerator: half a dozen waxed roundels, awaiting their time to be consumed. No, there's quite a chummy little gathering, of farmhouse cheddar, of jack and Leicester, and one or two others, plus the gouda which still has another two weeks to air-dry, and a wheel of caraway cheddar which will come out of the cheese press this very afternoon, and join the gouda. Dunno what I am going to do about the furry little patches of mold growing on the surface of the gouda, though – probably scrape them off very carefully, baste with salt and wax . . . waxing the cheese sounds kind of suggestive, doesn't it? My daughter has Karate Kid flashbacks: "Wax on . . . Wax off. Wax on . . . wax off." 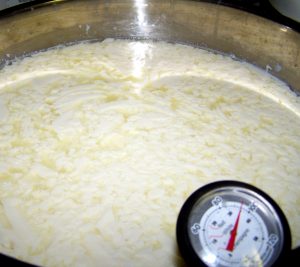 For myself, I have ambitions to make a four-pound wheel of parmesan – which will age for most of the rest of the year before being consumable, and my daughter, who deeply loves and adores brie can hardly wait to start brewing up a wheel of it herself, now that she has gotten the hang of fresh mozzarella. See, we have elevated tastes in our household, and can't often afford the good stuff; making it ourselves has been our family's first fall-back position since practically forever. 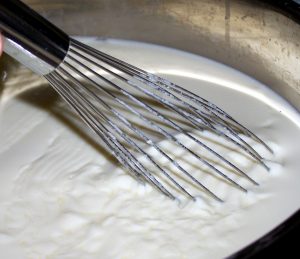 And it is not really that hard, nor is it particularly expensive . . . well, the 4-pound cheese heavy food-grade plastic cheese mold was a bit on the pricy side. But that was my mad impulse, after being paid generously for some freelance work. And I made up for it by fabricating a functional cheese press out of two lengths of pine plank and some hardware for about $10 – so, it all comes out in the wash, as my English gran used to say. 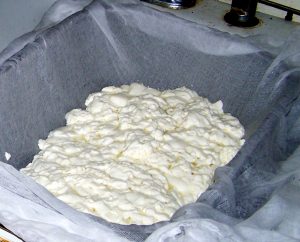 My daughter started it first – she bought a cheese-making kit, to make mozzarella and ricotta with – and then I got ambitions and bought a book of recipes, and so every two weeks or so, we buy two or four gallons of milk, over and above household needs, and do a batch of cheese. There are some special requirements for basic cheese – special cheese salt, a jug of distilled water, starter and rennet tablets – and making a four-pound wheel requires doing two batches, and then combining the curds, once the whey is drained away, but if you can follow a recipe, it is not rocket science or brain surgery. 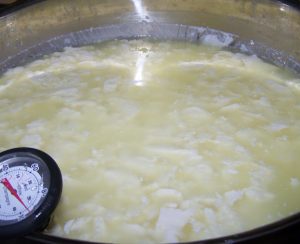 I think my favorite moment is when the rennet has set – and two gallons of milk has congealed into a kind of custard, just waiting for the touch of a balloon whisk (my suitable sub for a curd-cutter) to slice up the mass into ribbons and shreds, for the clear yellowish whey to separate out from the white milk solids. It's almost a fun as scooping the drained and salted curds into the cheese-cloth lined mould, and tightening down the press so that even more whey drains away, and the whole mass is compacted into a solid, heavy wheel. And you know what? The uncured green cheese . . . it really does look like the moon. 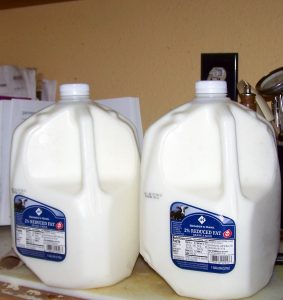