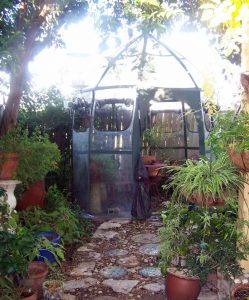 So, now that it is cooling off a bit, and maybe the seasonal trees are about to start thinking about the possibility of perhaps changing color sometime soon, it's time to sort out the garden for winter. A few of the hanging tomato plants still had a few slowly-ripening tomatoes on them, but the rest were pretty well done for the year. So this last week before the rain kicked in, we pulled them up, and tossed them into the mulch pile, and moved the hanging frame around to hang facing the kitchen window. Oddly enough, the eggplant, okra and various Bell and jalapeno pepper plands are still going great guns, and I intend to let them go on as long as they can. I once had a jalapeno pepper plant that went through three seasons, due to being planted against the south-facing wall of the house, and sheltered from cold winds. So, all to the good, now that summer is over – we certainly will not have to buy any more pepper plants in the spring. 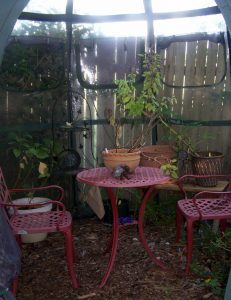 Having gotten through the worst of summer, now we must face the worst of winter – and there will be a worst, I am certain. There will be some days and nights where the temperatures will plunge to the twenties and even below ... and now we have even more plants which will need sheltering. The spider plants and the hanging baskets full of herbs will not handle cold at all well, and there is really not enough room now to bring them inside, or shelter them in the garage. But this year, we have a solution to that. But I am getting ahead of myself... 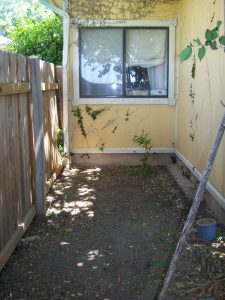 Some of the bedding plants which I had optimistically set out just as the summer heat reached apogee did not thrive as expected, in spite of daily watering, so we had to reconfigure that back corner of the garden ... perfect for the folding greenhouse.

This was an item put out by one of our neighbors this spring – a large, round carrier, and a bag of stakes, and another of support poles. They put it on the curb with a note saying that whoever wanted it could take it. And we did, although to be honest, we thought it was something else – the white gabled oblong structure that we had seen in their back-yard. We thought this was something which would exactly fit over the raised bed that we planned to build in a tiny square space at the back of the house ... but on Monday, when we unzipped the carrier and took out the body of the greenhouse, we discovered several things; it wasn't the white gabled oblong ... it was actually clear plastic, round and simply huge. It was a name-brand portable conservatory – and originally a rather pricey item. I have no idea why it became surplus to our neighbors' garden needs, although the difficulty of putting it up and taking it down might have something to do with it.

No, it wasn't as easy as advertised – it took the two of us two hours, spread over two days. Slightly used in condition, it is still a very cleverly-designed product, and it looks positively magnificent. We zipped the windows open, moved in the garden table and two chairs, and a number of plants in pots – and there we are. When it becomes cold, all the other tender plants will be moved into it, the whole thing will be zipped up tight – and there is even a little flap to run an electrical cord for a heater, or maybe even a single light-bulb, to keep it all warm. Winter can come any time, now ... although since it is expected to be in the eighties this first week of October, I don't think winter is in any hurry about it.