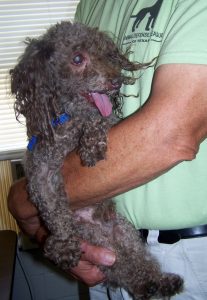 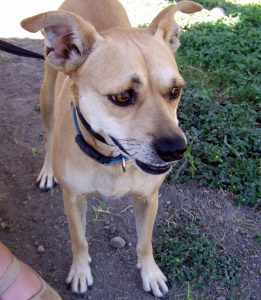 ... At the Animal Defense League; every Wednesday until the end of this month, the adoption fees for dogs over the age of puppy are reduced ... which is a very generous concession indeed, considering that the dogs available have been spayed or neutered, chipped, and up to date on things like rabies vaccinations and heartworm medication. We are not in any particular need of another dog at present, as the pair that we have are completely satisfactory, fairly young and in good health. But if we were looking for another dog, and the fates that dictate these matters didn't present us with a suitable candidate straight off the streets of our own San Antonio neighborhood (as was the story with Connor, who was found running loose, and the charming little Pom, also found running loose) we would certainly consider adopting from the Animal Defense League. They have a sprawling compound off Nacogdoches Road, near the Wurzbach Expressway; a dozen buildings, an animal hospital facility, and a large area set up as a dog park. 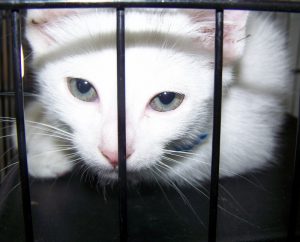 So, hearing about this – and my daughter also heard that there is a thrift shop involved – we decided to stop by the place and actually go inside, and see if I could take some cute pictures of the cats and dogs and do a blog post about it. I had only been driving past the place for nearly fifteen years, so it was about time. We did explain that we weren't interested so much in adoption, as we were encouraging other people to do so. The management in the adoption center were perfectly amenable to this, so we circled through two of the small dog buildings ... but first, my daughter had to look at the kittens. There is nothing cuter than a basket of kittens, and there were some terribly appealing ones on hand in the so-called 'Kitten Room'- including a little all-black one suitably named "Salem" who kept reaching out with his paw through the wire as I was taking pictures of the infant flame-point Siamese brother and sister in the adjacent cage. "Me!" it was as if he was commanding, "Me! Pay attention to me!" 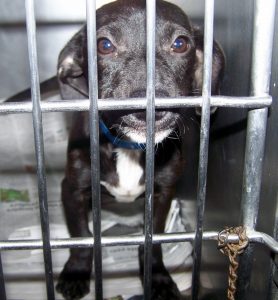 Anyway – on to the small dogs and puppies; there were not very many puppies. The uncrowned king of the puppy area was a small poodle, who was introduced to us as "Patriot" – a special, special-needs dog. Patriot is almost nine years old, and completely blind. In spite of that, he is friendly and outgoing. He gets around all right, but absolutely hates the confinement of the cage. He is actually most content, sitting in a lap or in a basket by a chair – and appears also to be allergic to grass. He'd be a perfect pet for someone working from home in a small place; his demand for walkies would be absolutely minimal. 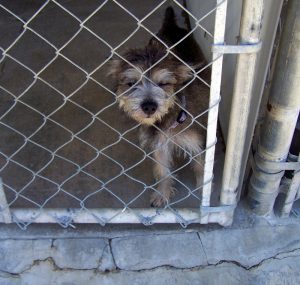 Then we walked around to a larger building housing a number of small to medium dogs, and the attendant suggested that if we wanted to get some good pictures, just tell her which dog took our fancy. We could go out into the dog park area, and get some good pictures. Our interest alighted on a medium-small tan-colored dog named "Piglet" mostly because of her pleading eyes, and the way her ears stuck out to the sides of her head. Piglet is half Chihuahua ... and pit bull. However that worked out, the mating itself must have been comic to behold. In any case, it resulted in a sweet-tempered and appealing little dog, which came along readily on the leash. She was described as being rather shy, but we didn't find her so. My daughter is still rather surprised that she didn't wind up coming hope with us anyway. So – that was our Wednesday. And if you are considering adding a dog to your family, consider the Animal Defense League. On Wednesday or any other day.