Work to Revive the Garden 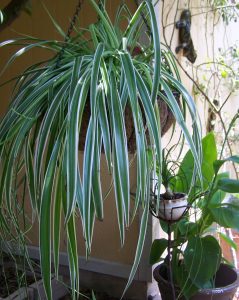 Gardening with me comes in fits and starts, and it depends on a lot of things – is it too blazingly hot to spend much time out of doors? Are the various native plants relatively thriving? Was there enough rain to keep everything relatively well-watered without having me spend a lot of time out there with a garden hose? I did myself a favor a good few years ago, by taking out the grass and doing xeriscape, but that was something done in gradual stages, and as soon as it was done I sold the lawn mower to a neighbor for 45$. Month in, month out, all the way around the year, the water bill runs about 30$, and the yard usually doesn’t look too bad. At it’s very best, of course – it looks darned good. Alas, it hasn’t looked darned good in a bit, being struck by several disasters in sequence. 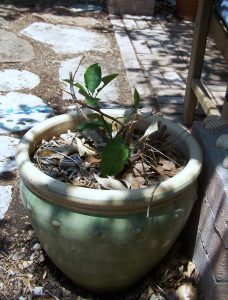 The first disaster was a pair of young boxerish dogs that my daughter found running loose in the neighborhood late in the fall; they had collars but no tags, and very little evidence of having ever been domesticated . . . aside from being overwhelmingly, exuberantly affectionate. She eventually found some suckers . . . er, a good home for them, but not before they carved a wide swath of destruction through my back garden. 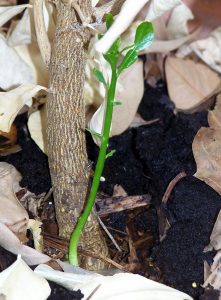 Let’s see . . . demolished the all-weather padding on the chaise lounge, scattering fabric scraps and stuffing everywhere, broke a pottery garden ornament, brutally uprooted a good-sized lemon tree in a large pot, dug several holes in flower beds, including two which uprooted a pretty-well-established rose bushes, ripped the gas barbeque cover to shreds, and destroyed the sliding screen door. They had also begun chewing on the wooden porch furniture; a sturdy wooden chair and a swing. I was more than happy to see them depart to a new home, and glad to hear there was nothing in their new owner’s back yard but a fence and a large patch of grass. 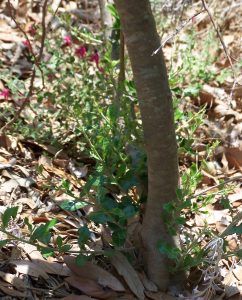 Barely had the garden begun to recover, when the second disaster hit in late January – a bitter cold snap which seemed to last for days. There was only room inside the house for a handful of the more tender and valued potted plants. Everything else was moved onto the back porch and covered up – but alas, it was too cold for far too long, and by the end of it, just about everything except the roses were dead. The hanging baskets of spider plants, the scented geraniums, the lemons and the Key lime tree, the herbs and the ferns . . . all reduced to dry brown sticks and leaves, the native plants all gone dormant and frost-burned right down to the ground. I’d look out at the garden and think – if I could afford it, I’d have the whole thing plowed up, scraped clean down the caliche and start all over. 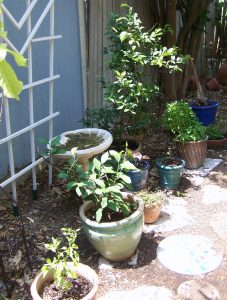 But the natives came back, green and lush and vigorous . . . and then I began to find new green sprouts shooting out from the lower stems of lemons and the Key lime, new shoots coming out at the base of the olive tree. I had let them go, because I was much to disheartened to cut them down or throw them out at the start, but a reassuring number of them have turned out not to be dead at all; just resting, and pining for the fjords. This last weekend, I spent some money on plants at Wimberley Market Days, and out at the Antique Rose Emporium – not a whole heck of a lot of money, but enough to fill enough of the empty pots . . . and it’s starting to look good again.