Halliburton Begins Construction of Base of Operation in San Antonio

The Eagle Ford shale operations may be the largest oil field ever discovered in Texas. They are predicting millions and millions of dollars worth of oil and hundreds to tens of thousands of new oil related jobs from San Antonio throughout South Texas. Houston based oilfield giant Halliburton, the world leader in the oilfield service industry with operation in more than 70 countries began work on a $50 million base of operation in San Antonio. The planned 400,000 square foot structure will be located near I37 and Loop 1604 in southeast Bexar County. 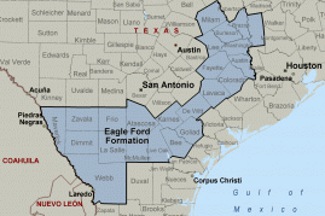 Halliburton's major business segment is the Energy Services Group which provides technical products and services to petroleum and natural gas exploration and production. This new facility will employ 1500 workers to support it's operation in the Eagle Ford shale. Our many military veterans and military retirees may find employment in the oilfield industry. Many of these jobs are higher paying jobs in the $70,000/year to well over $100,000 per year jobs range and may require specialized training or miniumum of a 4 year or advanced degrees such as a PhD. Texas A&M San Antonio campus is nearby.

Employment will not be limited to the oil fields directly. The facility will require administration and laboratory personel as well as those in the high tech fields, engineers, geologists and chemists. In addition to truck drivers; mechanics and automotive technicians will be required to service their fleet of trucks at the new facility. Halliburton hopes to hire locally 75 percent of the anticipated 1500 employees.

Halliburton's base of operation is to be fully operational by 2013. Bexar County Judge, Nelson Wolff reportedly said that the precense of Halliburton should aid the region's economy as a whole and boost demand for higher-end housing. Early seat of the pants reports indicate that San Antonio's high end/luxury communities such as the Dominion and even Boerne's Cordillero Ranch are already seeing interest from oil related business professionals wanting to relocate to San Antonio. Even surrounding communitities such as Floresville real estate and Pleasanton may see a increase in demand for housing.

Baker Hughes, Weatherford International and Schlumberger have also announced multimillion dollar facilities to be built in southeast Bexar County and will be hiring hundreds to support their operations as well.