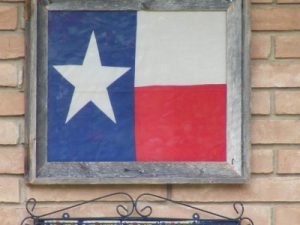 I can't say that I was very surprised to find out from various online sources last week that Texas is pumping so much oil from the Eagle Ford Shale formation in South Texas (among other oil-rich shale formations, some of which are not quite as well-along as far as drilling goes) that if it were an independent country, it would be one of the top fifteen oil producers. I am not one who follows this kind of thing, religiously – although where I grew up in Southern California, I remember seeing many a small rocking-horse pumpjacks scattered here and there, nodding busily away in the bean-fields and citrus orchards in Camarillo, or along the highways and back roads. It was just one of those things in the background. I don't know if there are many pumpjacks left in So-Cal now. Probably not, although they are at least as unlovely as wind turbines and probably don't kill nearly as many birds. I lament the loss of the place where I grew up, by the way; a place of citrus groves, and lonely hills, a rural, blue-collar and working-class kind of place, where you could drive in a single afternoon from a palm-tree desert to a pine tree covered mountain-top frosted in snow. Alas, it seems that the wealthy coastal enclaves drive California now, to the ruination of the places which I remember so fondly.

But I like to think of Texas as a massive producer of oil and gasoline, especially when the stuff gets to be north of $3.00 a gallon. And I should have so known that the boom was big, and doing good for South Texas, just by simple observation over the time that I have lived here, especially since I began to write historical fiction and taking long road trips – towards Beeville and Goliad and Port Lavaca and all – especially to Goliad, which we have done for a good few years now. It once was, going down 181, through Poth and Karnes City and Kenedy, or by other routes through Smiley or Stockdale and Nixon to other destinations. Four or five years ago, many of the little towns along the way appeared as if they were dying on the vine. There were so many crumbling storefronts – and the ones open for some kind of business presented a more forlorn aspect than the ones which had given up the ghost and boarded up entirely. Weekday or weekend – such towns were deserted by mid-afternoon. Even the parking lot of the Walmart in Kenedy was all but deserted the first couple of times we drove past.

We first began noticing the changes along about Christmas 2010, driving down to Goliad to take part in Christmas on the Square. Suddenly – there were oilfield developments, truck parks and wells, dotted here and there among the pastures and brushlands; newly paved and graveled, lit up boldly at night. There was a little more traffic on the roads and the small towns didn't look nearly so forlorn. The crumbling motel suddenly was rehabbed, and a number of new cabin-style units added to the row of existing roomettes. There were lights in the café, new vehicles parked out front, and on the edge of town there were several new RV parks – which, since there were no golf-courses, lakes or riverfront amusements – were obviously for workers rather than vacationers. New housing developments were going in, outside of Karnes City and Poth – and the Walmart parking lot was full. We remarked on this, to some old friends in Goliad – long-time residents, who confirmed our observations. There were neighbors and residents who owned country acreage who had been scraping by on a shoestring for decades – and now they had regular and generous checks for leasing their land.

On the whole, this is a good thing – and a good thing to know that this new oil boom has bought some prosperity to places that hadn't seen much of it lately. I'd much rather that some of what I pay at the pump for unleaded is going right back here to Texas.